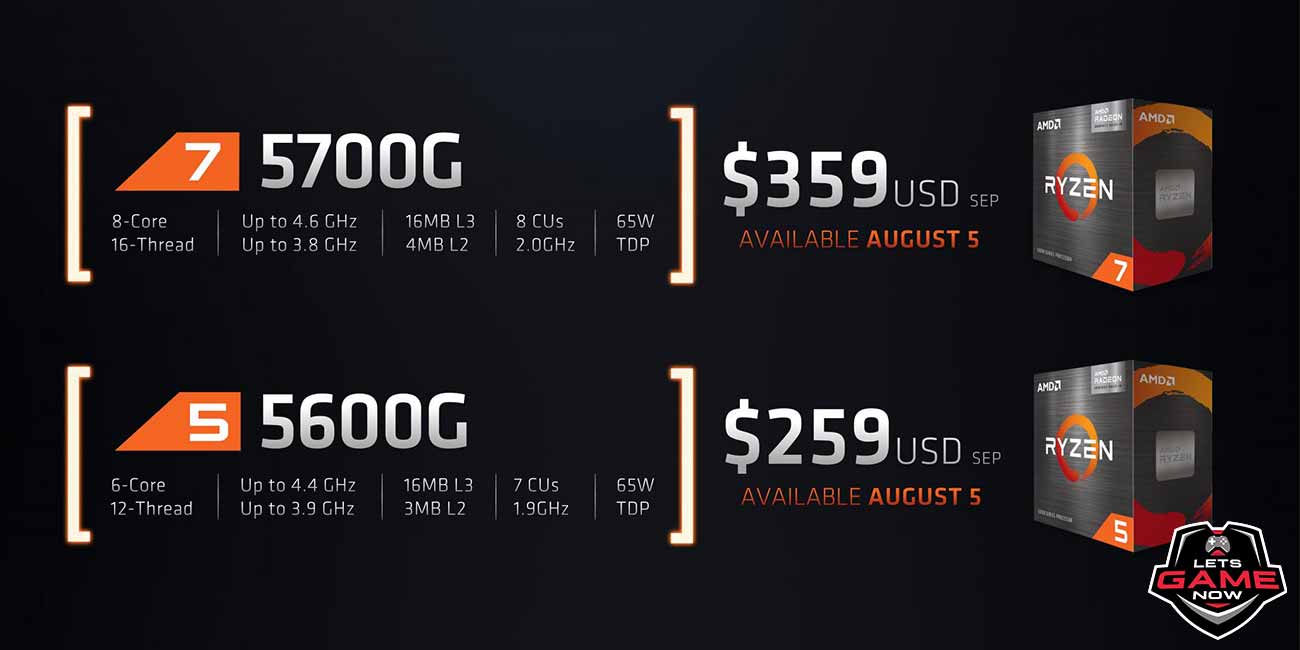 AMD presented new APUs that should now also be available for the end customer segment. The CPUs are a welcome alternative, especially in times of graphics card shortages, and a very good option for office computers, as they are equipped with an integrated graphics card. With the Ryzen 7 5700G and Ryzen 5 5600G, there will finally be more powerful APUs for end customers from August 5th. In general, the Ryzen 5000G, which goes by the code name "Cezanne", is finally based on the Zen 3 cores that have long been found in the Ryzen 5000 processors and EPYC server CPUs. The new family consists of a total of three processors: Ryzen 7 5700G, Ryzen 5 5600G and Ryzen 3 5300G, with only the first two will find their way into retail.

AMD Ryzen 7 5700G specifications
The AMD Ryzen 7 5700G will be the flagship in the new lineup. The APU will have 8 Zen3 cores and 16 threads. In terms of clock rates, it is specified with a 3.8 GHz base clock and 4.6 GHz boost clock. The level 3 cache is a lush 16 MB and the level 2 cache is still 4 MB. A low 65 watts await us in the TDP. It wouldn't be an APU if the integrated Vega GPU were missing here. This is equipped with 8 compute units or 512 stream processors. The graphics unit will run at 2.0 GHz. There will also be a Ryzen 7 5700GE, which is specified with a minimalistic 35 watts. The specifications are the same as those of the Ryzen 7 5700G except for the 3.2 GHz base clock and 4.6 GHz boost clock.

There is also a Ryzen 5 5600GE, which is also specified with 35 watts and clocks a little lower: 3.4 GHz base clock and 4.4 GHz boost clock. According to initial information, the AMD Ryzen 7 5700G should be significantly faster than the Core i7-11700. According to the company, it is 63% faster in content creation, 28% faster in productivity applications and 60% faster in computing power. The graphics unit should even be 2.45 times faster. AMD compared the integrated Vega GPU against the Xe graphics of the Intel Rocket Lake desktop CPU. That would be a very strong increase in performance and an advantage of the AMD APUs if the values can also be confirmed in practice.

So far, AMD has advertised the Ryzen PRO 5000 models on its website and you can find some models, but these are reserved for system integrators and are difficult to get in retail stores. Customers interested in buying have to be patient until August 5th.